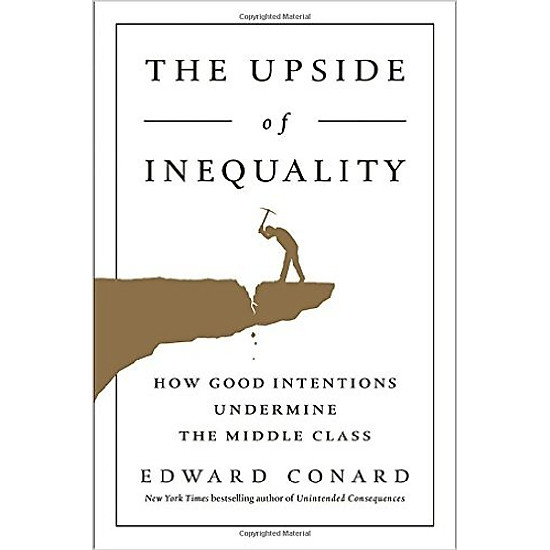 The Upside Of Inequality

The Upside Of Inequality The scourge of America’s economy isn′t the success of the 1 percent—quite the opposite. The real problem is the government’s well-meaning but misguided attempt to reduce the payoffs for success. Four years ago, Edward Conard wrote a controversial bestseller, Unintended Consequences, which set the record straight on the financial crisis of 2008 and explained why U.S. growth was accelerating relative to other high-wage economies. He warned that loose monetary policy would produce neither growth nor inflation, that expansionary fiscal policy would have no lasting benefit on growth in the aftermath of the crisis, and that ill-advised attempts to rein in banking based on misplaced blame would slow an already weak recovery. Unfortunately, he was right. Now he’s back with another provocative argument: that our current obsession with income inequality is misguided and will only slow growth further. Using fact-based logic, Conard tracks the implications of an economy now constrained by both its capacity for risk-taking and by a shortage of properly trained talent—rather than by labor or capital, as was the case historically. He uses this fresh perspective to challenge the conclusions of liberal economists like Larry Summers and Joseph Stiglitz and the myths of “crony capitalism” more broadly. Instead, he argues that the growing wealth of most successful Americans is not to blame for the stagnating incomes of the middle and working classes. If anything, the success of the 1 percent has put upward pressure on employment and wages. Conard argues that high payoffs for success motivate talent to get the training and take the risks that gradually loosen the constraints to growth. Well-meaning attempts to decrease inequality through redistribution dull these incentives, gradually hurting not just the 1 percent but everyone else as well. Conard outlines a plan for growing middle- and working-class wages in an economy with a near infinite supply of labor that is shifting from capital-intensive manufacturing to knowledge-intensive, innovation-driven fields. He urges us to stop blaming the success of the 1 percent for slow wage growth and embrace the upside of inequality: faster growth and greater prosperity for everyone.